A while ago, I wrote for a site that allowed me to explore old classics, as well as old favourites with a new perspective.  However, I have since stopped writing for them considering it was a North American site (being a UK writer, logistics and timings became problematic), essentially burying my articles.

With that in mind, I am going to put my old stuff so that it can be ‘refreshed’.  First up, my views on Woody Allen classic, ‘Manhattan‘. 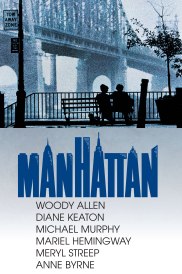 When people think of Woody Allen, most people think of the 1977 romantic comedy Annie Hall. It has the romance, the comedy, his beautiful partnership with Diane Keaton and the award-winning screenwriting collaboration with screenwriter Marshall Brickman.  However, as witty and smart as Annie Hall is, it is not as visually stunning as his 1977 romantic comedy-drama Manhattan.

Manhattan follows comedy writer Isaac Davies (played by Allen), who is in a relationship with Tracy, a 17 year old girl and has an unfulfilling job as a comedy writer.  His married best friend, Yale, is having an affair with Mary (Diane Keaton), to whom Isaac eventually becomes attracted.  The situation soon turns into a complicated love triangle, when the deepest feelings are laid bare.

Woody Allen’s Isaac comes across as a man living a refined lifestyle; he has deep, smart conversations, attends charity events and has a devoted girlfriend.  Yet with his fast intellectual talk, it is like he is masking an insecurity like he is suffering a mid-life crisis; his girlfriend is significantly younger and his  ex-wife (played by Meryl Streep) came out of the closet and is writing a book about their failed marriage and he impulsively quits his job to write a book.  His interactions in the New York intellectual social scene makes the viewer more like a fly on the wall, unlike his direct interactions to the audience in Annie Hall. Essentially, Isaac does not know what he wants in life and the viewer feels that he is looking for more than a healthy and loving relationship, which is arguably right in front of him.

In comparison to her role as Annie Hall, Diane Keaton is less quirky and more level-headed as fellow intellectual Mary.  Her awareness of self-intellect made her a perfect sparring partner for Isaac, from initial hostility to intrigue and interest.  Keaton portrays Mary with a complex and mature approach, making her more cultured in the ways of the world in comparison to the young Tracy, played gracefully by Mariel Hemingway.  Even though she is confident in her feelings towards Isaac, Tracy’s idea of romantic love – for instance, the two of them riding a horse-drawn carriage – is naive.  Hemingway has a certain schoolgirl charm exuding innocence and simplicity in the film, playing her with a grace and eloquence not really shown by the other characters. 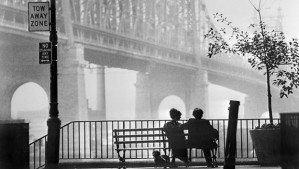 The love square is one thing but nothing in comparison to Gordon Willis’ cinematography captures the essence of the city, capturing Allen’s love for New York on celluloid.  Allen has stated that he always saw the city in black and white and adopts a classic take on how New York is shown on screen.  From the sweeping shot in grainy black and white of the New York skyline set to George Gerswhin’s soaring score, it sets a mood of elegance and a romantic, almost decadent feel to what laid in store.

Manhattan is essentially a love story from Woody Allen to New York and proves to critics that the world can be glamourised with intellect and the idea of simple romanticism.