It has been a while since I posted a review. Like my past posts, I will blame it on laziness…yes, let’s do that.

Seeing as we are nearing the end of the awards season, it makes perfect sense to review a film that has been unfairly overlooked this year. 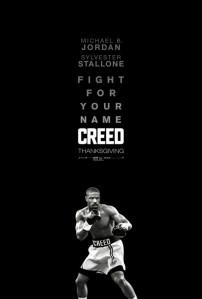 Creed follows Adonis ‘Donnie’ Johnson (Michael B. Jordan), the illegitimate son of the late Apollo Creed. Raised by Apollo’s widow Mary Anne (Phylicia Rashad), he leaves his job in a securities firm to follow his dream as a boxer. Travelling from LA to Philadelphia, he seeks out his father’s friend, widower Rocky Balboa (Sylvester Stallone), to train him.

Even though it has been a major talking point, I’ve not commented explicitly about the diversity row at this year’s Academy Awards, mainly because I’ve had issues about the lack of Asian nominees in the principal categories in the past. In my eyes, the Academy missed a key opportunity here; when we are coming into an age where diversity is a major selling point (I mean, Star Wars 7 had two protagonists that didn’t fall into the typical male Caucasian mould), nothing would have screamed progress than to see director Ryan Coogler and Jordan among the nominations.

First thing I’ve noticed is that Cooler didn’t run with the stereotype as seen in the film’s promo material.  There have been films where you have the hero, who is the athletic diamond in the rough, but they end up being formulaic.  In a way, that doesn’t happen here.

Unlike arrogant Tommy Gunn from Rocky IV, Adonis is an educated and driven young man that forsakes security because of the pride he didn’t know he had. Coogler develops the relationship between the two protagonists, as well as bring out what they need out of each other. In Adonis, Rocky sees someone in his future (after being stuck in the past) and Adonis sees the father/mentor figure he needed, who also sees him for who he is. He accepts his passion and despite guilt over Apollo, he shapes Adonis to live his dream- to step out of his father’s shadow.

Jordan is compelling as the determined Adonis, whose commitment to become a fighter is practically overwhelmed by his late father’s legacy. Like his (probably) most famous character, Stallone has a lot on his shoulders by venturing into a new stage of the franchise, especially after six films playing he same character. However, he effectively stays out of the limelight, allowing the new generation (Jordan) to carry the film. As a result, Stallone’s understated yet controlled performance shows how far Rocky being overly sentimental in the past.

The female characters are great as well; while unrelated, Mary Anne treats Adonis like the son she never had, and his love interest Bianca (Tessa Thompson) is equally strong-willed and is also living her dream, even though she is hindered by her progressive deafness.

Coogler proves to be a great action director with his close, seamless fight shots, while capturing uncheesy sports montages and intimate interactions. Coupled with the tightly structured screenplay co-written by Aaron Covington, you end up rooting for Adonis to not only win, but also succeed in his own right. In his own words, he wants to prove he wasn’t a mistake.

Overall, Creed is a sporting movie that can be enjoyed by older and younger audiences.  After this and Fruitvale Station, Coogler and Jordan are well on the way of joining  the likes of Scorsese/De Niro and Burton/Depp as a brilliant director/actor collaboration.