It’s been a while since I last wrote a blog post.  In-between work and screenings (and just plain laziness), I haven’t had a chance to put my thoughts together.  So, I’m now pulling my finger out of my ass and doing something about it.

On the way home from work this week, I spotted a promo poster for Jon Favreau’s new film Chef. I have reviewed this so I know if it’s any good (FYI, I believe so), but what got me about the poster is the quotes featured on the poster.  Not only was a quote of someone praising the performance of someone who was in it for ten minutes at most on display, but a number of crowdsourced quotes have been used to ‘fill’ in the empty copy space. 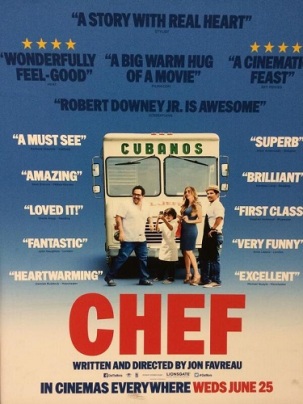 In this day and age, social media is the next best thing to ‘word of mouth’, and as soon as somebody mention or hashtag something, it is instantly picked up.  But the reviews showing up on the poster are one/two-word praises.  ‘Superb’; ‘excellent’; ‘very funny’…these quotes could relate to any comedy.  What gets me though is that people (like myself) take the time and energy to watch and review films like Chef for press purposes.  For free, no less.  Sure, watching the film before the general public is advantageous but what’s the point in a press screening if your press isn’t being published?

This is not the first instance I have come across where random quotes are being used for film press purposes.  Late last year, I came across a copy of Shortlist magazine that promoted The Hobbit: Desolation of Smaug and was instantly struck by the Twitter quotes on the advert. Same thing applies; random quotes by people who may not have even seen the film but their mutual buzz about the film was enough to grant them a space in promoting one of 2013’s biggest films.

The marketing gurus behind this über-ad also had the audacity to print the Twitter handles of the quoters (talk about lack of privacy), giving curious people enough material to do a bit of research and discover that these folks were unlikely to be press (click on the picture for a closer look).

I have mentioned this to some people and I will say it again; film journalism is hard work; it is not just films and freebies.  A lot of fellow film bloggers and writers spend a lot of time and energy to do something that is, for the most part, voluntary unpaid work with very few rewards.

It is becoming harder for people to become a credible film journalist when an increasing companies are relying on the simplicity of social media for marketing purposes and unfortunately, cases like these prove that this is unlikely to improve in the near future.