For most teenagers, fame is the ultimate dream. Popularity, fortune and most importantly, great clothes. But for some, behaving shamelessly in public or, God forbid, work, sounds like a tedious path just to get some Chanel and Prada into their wardrobe. 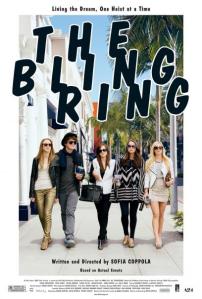 Lost in Translation director Sofia Coppola’s take on adapting real-life crime takes a dark path in her latest feature, The Bling Ring. The film recounts the lives of a group of celebrity-obsessed teenagers, who break and rob A-listers of their belongings – uncovering a hidden side that makes them more than your average teenager.

On the face of it, The Bling Ring encompasses certain themes and characteristics, such as wealth, popularity and ‘Valspeak’ in an indifferent tone; things all easily associated with the culture created from gossip magazines and reality television shows – and as a result, seems unimaginative.  Put simply, it is almost hard to believe that this group of kids can pull off a robbery.  Taking into account how incredulous it is that their crimes are so easily committed – their MO for choosing their victims is using simple tools on the Internet – the setup is nearly laughable.  On the other hand, there is a lack of sensitivity despite it being based on real-life events, presenting itself as a double-edged sword; it remains faithful to the characters and the story but it is difficult to relate to or feel any kind of empathy for their inevitable outcome.

Regardless, the cast are excellent but the limelight is easily stolen by Harry Potter‘s Emma Watson, who sheds her cute and bookish persona by succumbing to her dark side as wannabe model Nikki, and newcomer Katie Chang, whose portrayal as the shameless yet calculating Rebecca brings a chilling side to the group, as she gets her kicks out of petty crime and her ability to manipulate those around her, especially new kid Marc (Israel Broussard).  Through her creative eye, Coppola is able to emphasise the ‘fakeness’ of the characters whose vapidness disappears when they commit their crimes, while capturing their unpolished refinement. The crazed pacing almost fuels the adrenaline behind the key scenes and thanks to the late cinematographer Harris Savides, it is easy to imagine that these characters are in a world of them – untouchable to anyone else; just like a celebrity.

Fun, superficial with a hint of rebellion, The Bling Ring is slightly rough around the edges, making it fall short of Coppola’s previous features.