When you look forward to a film for months, the chances of it being a disappointment sometimes never come to mind…right up until you see the first few minutes.  From then on, the highly-anticipated film ends up being an unfortunate disappointment.  It is a shame this happened in the first few weeks of the new year. 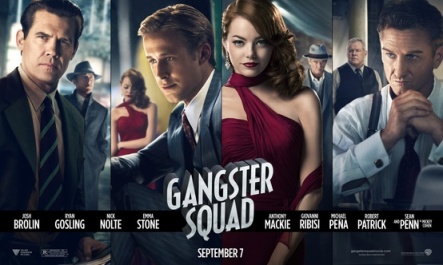 Given the promise of this film, there was a certain anticipation that only came with welcome adaptations and revisits to film franchises (believe it or not, there will be an adaptation that will make me squeal with delight).  Unfortunately, this falls short in all the bases. The plot fails to make an impact and the action sequences aren’t very slick, considering the film’s stylish era.  What doesn’t help is the poor (and on Penn’s part, almost incomprehensible) script and lack of tension during the dramatic moments, making it one predictable and lacklustre plot development after another.
The tragic shootings during the Dark Knight Rises screening in Aurora last year meant that this film had to be pushed back in terms of release and marketing, not to mention re-shoot one of the key scenes featured in the trailer.  Unfortunately, this alternate scene lacks the same punch and the film suffers with it regardless.

However, it is a quality ensemble cast, who – in the very least – look great in 1940’s garb; Emma Stone looking particularly sultry as gangster moll Grace Faraday.  There is that sense of familiarity with the partnerships of Brolin and Penn (from amazing 2008 Academy Award winner Milk), as well as Gosling and Stone (Crazy Stupid Love), so you know that there is talent in the film.  It’s just such a damn shame that Fleischer and screenwriter Will Beall didn’t give them any chance to shine in the limelight they deserve.

Messy, lacklustre and disappointing, the only saving grace of Gangster Squad is the quality of its cast.