Some people think he is lucky.  Others call him a genius.  It is strange to think that Quentin Tarantino has been a director for 20 years and he continues to go from strength to strength.  After the commercial and critical success of his last film, Inglorious Basterds (2009), we see him return in his ‘homage’ to Spaghetti Westerns – Django Unchained. 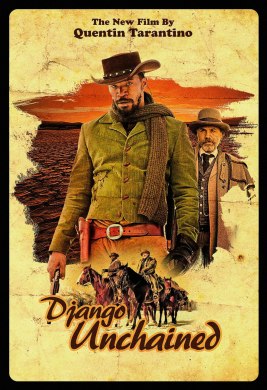 Set three years before the American Civil War, slave Django (Jamie Foxx) is freed by bounty hunter Dr. King Schultz (Christoph Waltz), who is tracking down the Brittle Brothers, a trio of killers who whipped and sold him and his wife, Broomhilda (Kerry Washington).  As Django agrees to help identify them, an unlikely partnership develops between the two as they proceed to track down the trio, as well as rescue Broomhilda from ruthless plantation owner Calvin Candie (Leonardo DiCaprio).

Given the scope of the plot, not to mention the quite small central cast, Django Unchained‘s running time of 159 minutes is overlong.  It feels like that are two films spliced at a pivotal point, with the beginning hour or so serving as teaser to the remainder of the feature, leading to an almost unnecessary climax as one subplot ends and another begins.

Playing up the social differences around that time brings attention to Tarantino’s almost constant use of the ‘n’ word.  Seeing that he is quite prolific for his use of it in his earlier features, notably Pulp Fiction – not to mention the attitudes of this certain period in American history – the fact that this is seen as a negative factor is redundant.  The same goes with the amount of violence; sure, there is lots of blood but that is to be expected; you don’t expect people to not be evidently injured after being shot.   Django is labelled as a Western but it is also an action film and put simply, you need violence.

Tarantino has always used a characteristic of Westerns in his features, from Mexican standoffs to the idea of a lone warrior, so to see what he can do when making a fully-fledged Western brings all his eggs into one three-hour-long basket of sorts.  His script is witty, sharp and one line bounces off each other – the first third of the film is brimming with humour; a scene with the Klu Klux Klan being a definitive highlight – and his cast certainly work his words.

Foxx’s Django shows a different kind of ‘cool’ that we have grown accustomed to as he quickly adapts to the power switch that comes with a former slave being quick with a gun.  Waltz is quickly becoming Tarantino’s lucky charm as his winsome performance as Schultz is just brilliant.  However, the stand-out performances easily belong to DiCaprio and longtime Tarantino collaborator Samuel L. Jackson, who plays Candie’s slave Stephen.  Both evilly despicable and ruthless as each other, they dominate their screentime making their characters possibly the most memorable villains in Tarantino’s filmography.

Violent, slightly overlong but don’t be put off the blood and language; it’s action-packed and utterly entertaining. Django is another gem in Tarantino’s crown and I wish him lots of luck during the awards season.